A few years ago, I discovered a seemingly miraculous “all-natural” sweetener called Truvia. It seemed too good to be “true” (pun intended): mild taste, didn’t cause cancer, derived from plants, and none of the fat-promoting calories of regular sugar. I wanted to know: what the heck is stevia? Is stevia natural and safe? And what are the best and worst types of stevia?

Turns out powder from the real stevia plant is a far cry from the “stevia” found in nearly every food product on store shelves.

If you eat food that contains stevia on-the-regular, you’re going to want to pay close attention as we cover a very brief history of stevia along with its health benefits and the best and worst types of stevia.

The Stevia rebaudiana plant hails from South America (Paraguay), where its leaves have been used for centuries to sweeten beverages and make tea. 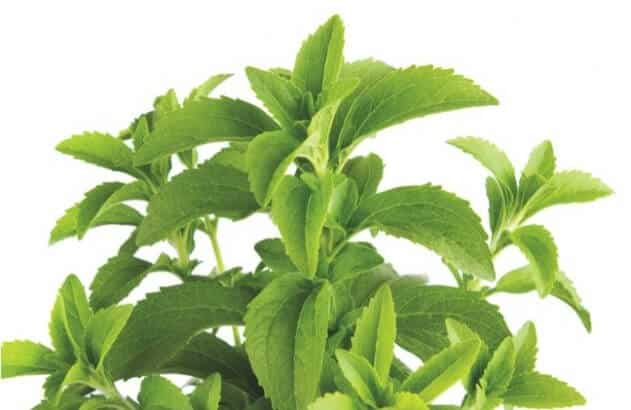 There are over 400 studies that showcase stevia’s ability to lower blood sugar, promote weight loss, prevent cavities, and maybe even help prevent certain types of cancer.

But there aren’t a whole lot of studies on its long-term health effects. One study showed when rats were fed high dosages of stevia, it reduced their sperm production. This led the FDA to reject the stevia plant for use as a food ingredient in the 1990s.

However, several highly-processed, chemically-extracted compounds from the stevia plant were approved and granted FDA “generally recognized as safe” (GRAS) status: rebaudioside A in 2008, stevioside and rebiana extracts in 2009, and purified stevioside in 2011.

It’s yet another puzzling example of the U.S. food system at work.

What Types of Stevia Are Healthy and Natural and Which Aren’t?

If you prefer to eat real food instead of chemically-altered versions of real food, it’s probably a good idea NOT to listen to government agencies influenced by “Big Food” lobbying groups. Use this simple list (ranked from best to worst) when buying products with stevia instead.

Organic Whole Leaf Stevia (or “Green Leaf Stevia” or “Ground Stevia Leaf Powder”) – Whole leaf stevia powder is simply dried, ground leaves from the actual stevia plant … and that’s it. This is the least processed of all types of stevia and the type that has been used for centuries as a natural sweetener and health remedy. It definitely has an earthier, slightly bitter taste because it’s in its natural state, but you only need a tiny little pinch to sweeten your favorite recipes.

Stevia Extract (or “Stevia,” “Stevia Leaf Extract” or “Organic Stevia”) – Many brands (particularly those marketed as “healthy” and “natural”) use stevia extract. Don’t fall prey to the hype though—this type of stevia still goes through rigorous processing (and often bleaching) to extract certain compounds from the stevia plant. Plus, most food processors add an excipient (filler) that’s usually derived from a genetically modified product (i.e., maltodextrin, a processed starch made from GMO corn).

Truvia, PureVia, Stevia in the Raw – These are the types of stevia to avoid because of the extensive processing and added GMO ingredients.

Truvia, for example, goes through a patented 42-step processing method.

All commercial brands of “stevia” use chemical solvents, GMO derivatives, and/or other processed sweeteners. I wouldn’t touch the stuff. Eat Local Grown has a nice breakdown of several chemically-derived forms of stevia to watch out for.

The Bottom Line: Is Stevia Natural?

But the stevia most food companies use is a chemically-altered, bleached, stripped down version that’s likely to contain GMO fillers. Any time you see “stevia”, “stevia extract”, or even “organic stevia” on a food’s ingredients list, you’re getting a processed, inferior sweetener that’s NOT real food.

Dr. Josh Axe has a nice breakdown of the best and worst types of stevia for your health.

That is the only type of stevia that is 100% natural, safe, and healthy! And you only need a teeny tiny bit of it.

P.S. We only use organic, green, real food stevia powder in Pure Food Protein. Learn more about why each of our ingredients are safe, clean, and healthier than any other protein powder on the market and grab a sample bag for just $5 (including shipping) for a limited time.

One thought on “Is Stevia Natural? Here’s the Bitter Truth”